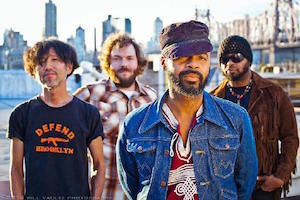 The Veldt are a unique and singular, musical proposition – authentic American soul music, without post-modern irony, without cliché. If theVelvet Underground had left the Factory and toured with STAX … They are Kane’s kissing kousins – Rudy Tambala (A.R. Kane)

For black artists, doing anything outside of the bubble, beyond what’s derivative of what white kids are doing, being able to express yourself honestly, is not celebrated at all. So when I heard these guys, it gave me confidence – Doc McKinney (The Weeknd, Drake, Estherio)

“No matter how futuristic space-age cyberpunk the music became, Daniel’s vocals was the gravity that kept us from floating away completely” – Michael A. Gonzales, Soulhead

Identical twins Daniel and Danny Chavis may originally hail from Raleigh/ Chapel Hill, North Carolina, but they have been East Village residents for the past 28 years. They lifted their band’s name from a Ray Bradbury science fiction story. Musically reared in the church and juke-joints of their native southern state, the twins have been performing since they were children, listening to music that included gospel, Motown and Pink Floyd. They now make music, together with bassist/programmer Hayato Nakao and the band’s original drummer Marvin Levi has now also returned to the band.

The first single is the emotionally wrought Sanctified, a ballad that perfectly captures the lush sound of Danny’s screeching guitars and decibel-breaking distortion, along with Daniel’s soulful wail and Hayato Nakao’s deep bass grooves and guitar feedback, the track serves as theperfect re-introduction to this dynamic band. The title The Shocking Fuzz of Your Electric Fur was borrowed from an E.E. Cummings poem. Its raging sound was influenced equally by the emotional soul of Marvin Gaye, free jazz warriors Sun Ra and Pharaoh Sanders, various Drake hip-hop tracks, and their own fertile electric imagination.